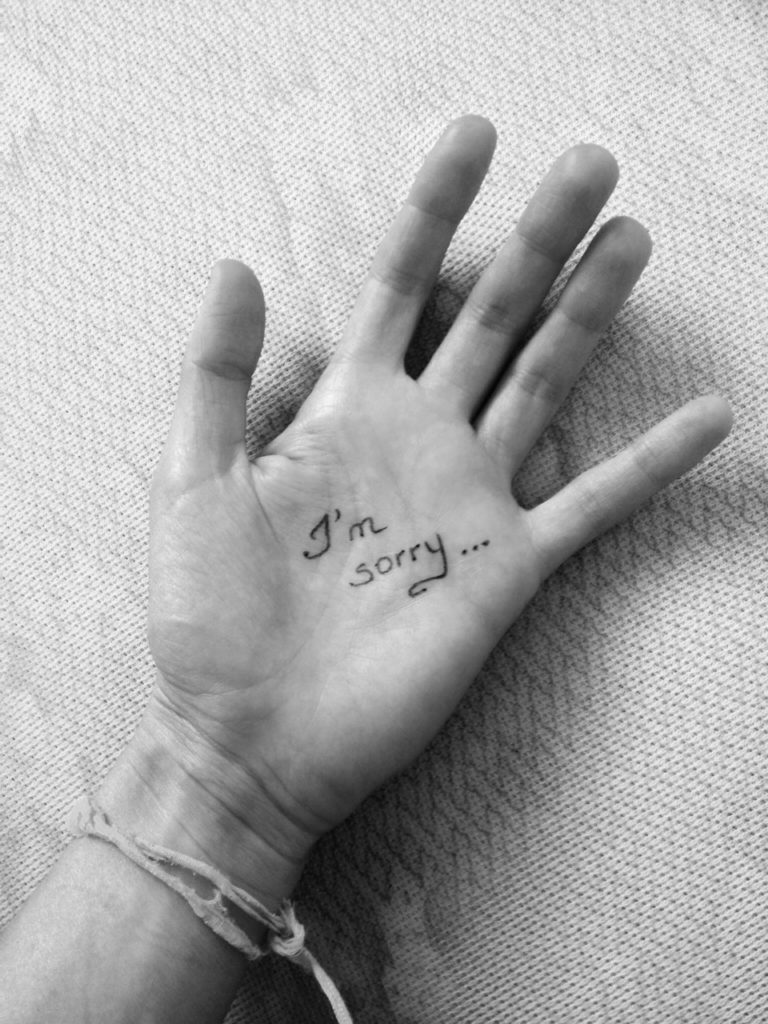 Yesterday was one of those days when I BADLY needed an apology. It all started a few days ago, when an old disagreement resurfaced with a close family member that made me realise that 13 years later I still consciously or not carry traces of it with me and allow it to affect my current life. And so I NEEDED an apology for something that happened 13 years ago and continues to cause ripples into today. Do you know those moments when you feel like you are about to burst from knowing that you were right and the only thing interrupting your happiness is the NEED for someone to acknowledge that? I thought I expressed my wish for an apology very clearly and repeatedly in many different ways. And nothing happened. Not even close – the dialogue continued to be heated with both sides only interested in their version of the story. As this new argument was boiling through e-mails, eventually I just stopped replying. And so here I was yesterday – with an unfinished conversation and badly NEEDING an apology.

The word for to forgive in my native Lithuanian language is atleisti which shares root with words such as leisti (meaning – allow, permit, let, enable) and paleisti (release, loosen, unbind). Now isn’t this just absolutely amazing?! For me this cuts to the very essence of what it means to forgive someone. It is in this releasing, loosening and unbinding of ourselves from the situation that requires forgiveness, that we allow, permit, let and enable ourselves to continue in our flow. Or looking at it the other way around, in our allowing, permitting, letting and enabling the situation to be what it is, we release, loosen, and unbind ourselves to be free from it. Reflecting on this, I noticed that none of the meanings infer anything about being a passive recipient, waiting for someone else’s favour that would permit this freedom or the need to have to escape the situation by force. Every single one of these verbs refers to a calm, composed and expanding action that requires no external interference nor permit. In other words, at the root of it, all that is required in the act of forgiveness is our desire and allowing to set ourselves free. And this has absolutely nothing do with someone else granting this to us, because the only person interrupting our own happiness is us. As always, we have the option to think that this power belongs to someone outside of us and continue to suffer waiting for an apology that might never come. Alternatively, we can give ourselves the permission to release it and move on.

There are a number of practices and rituals that work absolute wonders in my life when it comes to apologising and forgiveness. I love writing letters in general and to do both – express my apologies as well as forgiveness – to people with whom a conversation may no longer be possible or is too painful. Writing it out on paper allows me space to express and reflect at the same time. Seeing it all laid out on a page also brings a feeling of acceptance that somehow the two differing perspectives can co-exist at the same time. I believe that these letters have a huge energetic power and effect just by being written, and it is not even necessary to send them out. A ritual of burying or burning them (safely) gives me a sense of returning what no longer belongs to me, of permitting the Universe to recycle and transform an old situation, relationship or pattern that is no longer serving me. But please don’t go digging around the shores of Ireland and Spain, as you might just come across some of my old letters buried there!

I have recently become a big admirer of Emotional Freedom Technique (EFT) when I discovered it as a very powerful tool to control physical pain. Now I use it for anything – to relieve a headache, to cope with a long to-do list, or to release the fear of going to a dentist. I love the simplicity and the power of stating an issue that is disrupting my peace and concluding that ‘I fully and entirely accept myself anyway’. I have tested it in situations where forgiveness is at stake and it works beautifully.

We have a very beautiful rule in our relationship with my husband. It is that we always apologise both. In every situation. For everything. No matter who started it or “whose fault” it was. The logic for this is very simple. The fact that we both were a match to a situation requiring an apology, means that we both allowed ourselves to slip into the vibration of misunderstanding or conflict. In other words, we co-created the situation. Therefore, each gets to apologise for being part of it. Also, if you think of it, over the course of our time together in years to come we will probably both on average “cause” an equal amount of misunderstandings or conflict, therefore, for us it just makes sense to start by splitting the apologies in half in every situation as we come across them. This simple rule has been a major contribution to a purely magical relationship that we share. It means that every single situation is closed and finished and cleared at the end of it. The release and unbinding happens on both sides to such a degree that there is never a need to go back to any past situations digging for old resentment. The situation simply dissolves and enables the relationship to flow.

However nice it might be sometimes to receive an apology, the truth is that we have the power to release the situation ourselves without it. The amazing and yet obvious side effect of it is that deciding to release and unbind our own flow with no expectation usually will end up bringing that apology that we thought we so badly needed. The good thing is that even if it never comes, we are no longer stuck craving for it.

Now please excuse me, but I need to go write that letter and send it to 13 years ago.