“Disease could be a fortunate experience because it changes the course of your life from a direction that no longer serves your highest good, to one that does. Disease may, indeed, be one of the most efficient healing responses the body has in order to return or advance us to a life of passion, excitement and tremendous vitality.” 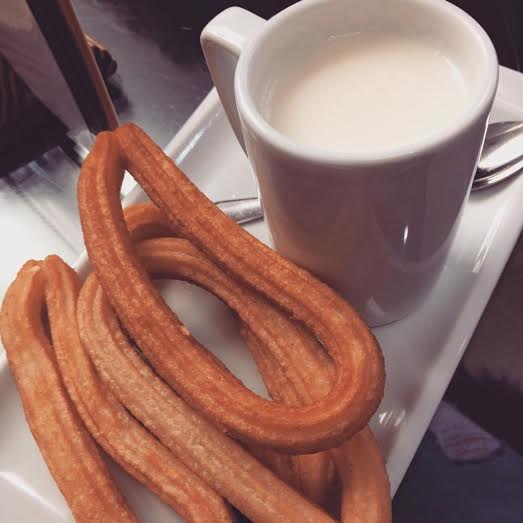 Last night woke up at 4am with a headache. After a few flips, turns, and attempts to fall asleep, it became obvious that it was going to need my full awareness and attention, so I proceeded out of the bed, into a bathrobe and to the kitchen to have some warm water with lemon.

The physical reason for the headache was instantly obvious – churros con concolate (deep-fried Spanish doughnuts with gloopy chocolate dip) that I had indulged in the day before. Well, that and probably some of that sugar and butter explosion cake that arrived in the post from my dad earlier during the week. While I would love to be able to say it’s not that big of a deal to enjoy a gluten-full, white flour, deep-fried, processed-sugar-filled “treat”, it kind of is a big deal for me and for my body because it happens so infrequently. It is a rare exception in my usual mostly vegetarian diet free from gluten, processed sugars, dairy, alcohol and coffee, but full of freshly squeezed juices and organic rawness that makes me unbelievably happy. Exceptions usually happen when I am travelling and am not at home or on other very rare occasions. It is my choice not because of any particular moral reasons about what is right and wrong or how animals should live to see their grandchildren, but simply because it works for my body and allows me to feel healthy and full of energy.

It was not always like that. I was reminiscing last week about my sugar addiction that was still part of my life a couple of years ago. It wasn’t necessarily that I had big quantities of sweets or chocolates each time, but rather that it was so diligently constant. I would have to have a dessert with every meal and sometimes even as part of the meal (like a sandwich with Starbucks caramel macchiato), and then I would just as diligently have sugar-crashes. For years, to my big surprise, none of my employers realised that every working day for about an hour and a half from 3pm, they were paying me just to keep my eyes open. I was not able to keep my concentration and could barely stay awake until “fixing the situation” by a helping to somebody’s birthday cake in the office or my own stash of emergency sugar supplies. I used to pride myself in being the one everyone in the office went to when their sugar levels were down.

And then it all changed 2 years ago on a chilly Saturday in March when I met with a holistic nutritionist. It was a week after an annual work appointment at a clinic in London that specialises in overseas workers and exotic diseases. My blood test picked up all the signs and symptoms of hypothyroidism. Again. Just like it had a year before that. Except that this time, things had gotten out of the warning range and into ‘this will really not get better on its own and you need to start the drug treatment immediately’ zone. It was explained to me that it wasn’t a big deal at all, nothing that a synthetic hormone levothyroxine would not fix. What was not explained to me was that this was scarily common (I later discovered how many of my close acquaintances had the same problem) and that the drug creates decades-long issues of never quite getting the dosage right as well as that normal thyroid function without drugs ceases to be an option.

Thankfully, I just knew that I knew that I knew this was not a solution for me, that all else would have to fail for me to opt for that option. I was really inspired by my sister who had made drastic changes a few months earlier and chose what was working for her which was super-healing Gerson’s diet. So the next day after I received the diagnosis I made an appointment to see a holistic nutritionist. Before coming to see her I had to track my diet for a week and fill out the biggest questionnaire I’d ever filled out about my body and health. Was I breastfed? Only for a few weeks until my mom had a mastitis. Was I vaccinated? Yes, in childhood and then more recently a full round of “exotic” vaccines were done for my overseas job. Was I using plastic kettle for making tea? That was our brand new kettle at work. Was I eating organic or conventional products? While a lot of what I ate was organic, it was not everything. Did I have mercury fillings? I did, four. And my favourite question – How far are you willing to change your current lifestyle and diet to change where you are at? To which I replied – whatever change it takes.

When my nutritionist and I met on that chilly Saturday afternoon, it was like comparing notes with a research buddy, we both had read and explored the links between thyroid, vaccines, immune system, and diet. The link between thyroid and gluten-allergy was particularly interesting, and after going through my previous week’s diet diary with a highlighter and marking all the gluten-full choices, a potential solution to the problem lit up. We made an extreme plan that was to start on the same day. Freshly squeezed organic mostly vegetable and green juices in the morning. Fully organic diet. Avoiding all foods that were fried, salted, with processed-sugar, with gluten, with artificial preservatives or additives, with ingredients that I could not understand, alcohol, coffee, things that came in cans and tins (including sodas), and limiting the intake of natural sugars (like having 1 dried date a day sort of thing!). We also had to address the fact that I was completely vitamin D and iodine deficient. And just to top it all up – regular exercise and weekly coffee enemas. And then we would see what happens.

What happened was that the first three weeks that followed were horrendous, ghastly, disgusting and disastrous. At the time we were only dating with my now-husband, and the fact that he didn’t just pack his stuff away during that time is the reason why we are now married. All of it was annoying – carrying a collection of boxes of snacks everywhere I went or alternatively panicking that I would starve; going to a standard food shopping centre and realising that 99.99% of its contents were not for me. Going out for food stopped being an option. But nothing, I said NOTHING, compares to what sugar withdrawal symptoms felt like. I turned into the most irritable short-tempered snappy PMS dragon that wanted to chew off the heads of everyone who even so much as mentioned they had a birthday (let alone bringing a cake to the office). Not having a dessert at the end of the meal made me panic – after eating a full meal, I would feel cheated and still hungry.

When all of it started to subside at the end of the first month I noticed changes – I had more energy during the day and wasn’t having to fight afternoon crashes. I started tasting things for the first time – you know the fact, that there are more flavours than sweet, salty and deep-fried. My head felt clearer and my emotions more balanced. But that was not the happy ending just yet. Triggered by all these changes, the following month my body began a detox campaign – there literally was not a day when I was not burping, feeling bloated, with a headache, with spots, experiencing heartburn, itchiness, you name it. It’s a confusing process called healing crisis, or the darkest part of the night before the dawn sort of thing, where everything seems to get really bad just before it gets better as your body realises it’s being flooded with goodness and decides to let go of all that no longer serves it.

In addition to diet and physical lifestyle changes, I found lots of fascinating metaphysical ideas about what thyroid imbalances and throat issues mean. It is associated with the blockages in the fifth emotional centre and neck chakra, and usually comes with feelings of humiliation and suppressed communication or self-expression, the sense of being interrupted and that it is never your turn.

And then the magic started to happen. Each time I had blood tests done there were changes that would surprise my GP. Each time she would say she was impressed with me being so disciplined and sadly add that the conveyor approach of the medical system meant she had no time to do a real case study with me about how improvements in thyroid health were possible without drugs.

Now all of it seems like an inspiring story that happened to me a long time ago. I learned a lot from it about my body and my mind. More than ever before I became convinced that our bodies make no mistakes and all symptoms, if we are really willing to listen, come with messages about us being out of alignment with our higher self, whether on the action or thought level. I learned about the magic power of our bodies and that it is not the doctors or the drugs that heal (although both can be necessary in specific cases), but our bodies heal themselves when the right balance is allowed and circumstances necessary for healing are restored.  I also learned that the doctor absolutely does not know best. In fact, it became obvious how little the doctors knew – and seemed to want to know – about me. During the appointments I was never even asked if I was sleeping, what I was eating, whether I was stressed at work or in my personal life. This brought a strong sense of responsibility and self-love towards my body, and made me feel empowered and confident that I was much more in control of healing than I had ever imagined.

I have been wanting to write down my healing story for a while and thanks to the headache induced by churros – here it is! Obviously, now that its purpose has been served, my headache is no more. The end!