Home Everything that you don’t know about children’s drawing

Everything that you don’t know about children’s drawing 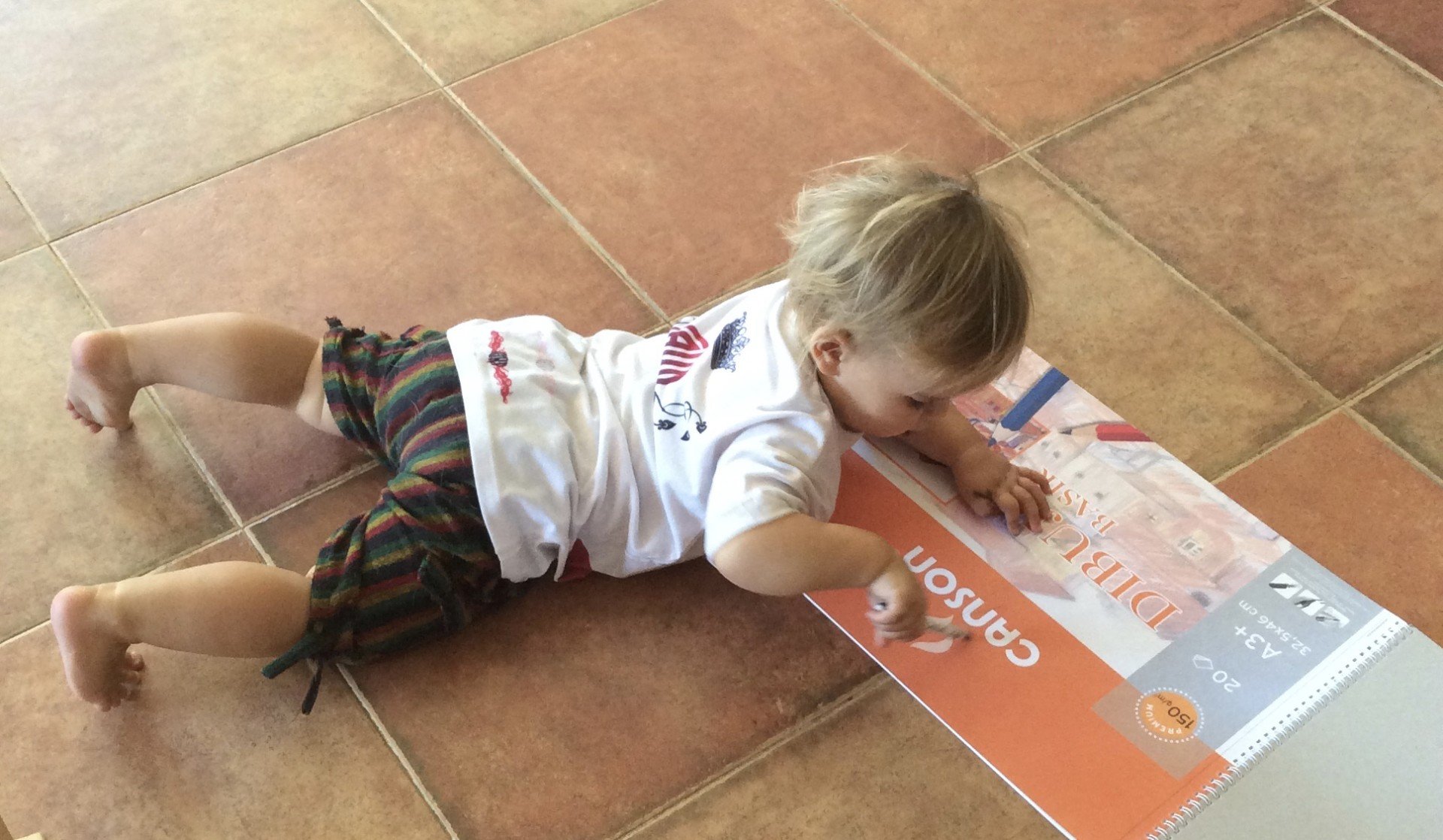 One of the most wonderful blogs that I have discovered this year is De Mi Casa al Mundo written by a Spanish mom, teacher and psychologist Aguamarina. The blog offers an alternative – more connected and respectful – take on motherhood, raising children and education, and in 2015 it won a prize for the best personal blog in Spain. With Aguamarina’s permission, I am translating one of the articles that struck a very deep cord with me – I hope you enjoy it as much as I did! (The original post in Spanish can be found here.)

Everything that you don’t know about children’s drawing

When a child draws a picture, here is something that can easily happen:

The child then sees his/her time of playing with the brush stroke and color as interrupted, looks at the adult (perhaps his mother, his father, his teacher, …) and may not know how to respond.

The child then nods, wanting to keep the adult happy, because s/he has learned at the age of three that receiving recognition from adults makes life easier.

The loss of spontaneous manifestations

And this is how, with a continuous intrusion of an adult into his/her game of drawing, there comes a day when the child runs swiftly to show their drawing to an adult, because s/he expects to receive the attention and recognition, wants to live up to the adult’s expectations.

This situation that I just described is no more than a daily situation that any child can experience at home with their parents, at school, at an extracurricular class, at a toy library…

And I ask myself, what are we doing? Let’s leave the children to draw and paint in peace!

A child does not draw in order to seek someone else’s pleasure. The child does not create, does not generate pieces in the artistic sense of the word, nor draws to communicate or to show us something, but by obeying an inexhaustible inner necessity determined by his or her genetic program.

Again, a child does not draw to communicate, nor draws to show us something, but draws in order to create a world that is theirs, theirs alone, free.

And any external intrusion by an adult destroys this world of a child.

And I will explain to you why…

The work of Arno Stern about children’s drawing

A few months ago this book by Arno Stern fell into my hands, yes, the father of André Stern (who just recently gave an exclusive interview for the blog), and I have to say that it left me mesmerized, amazed, impressed. 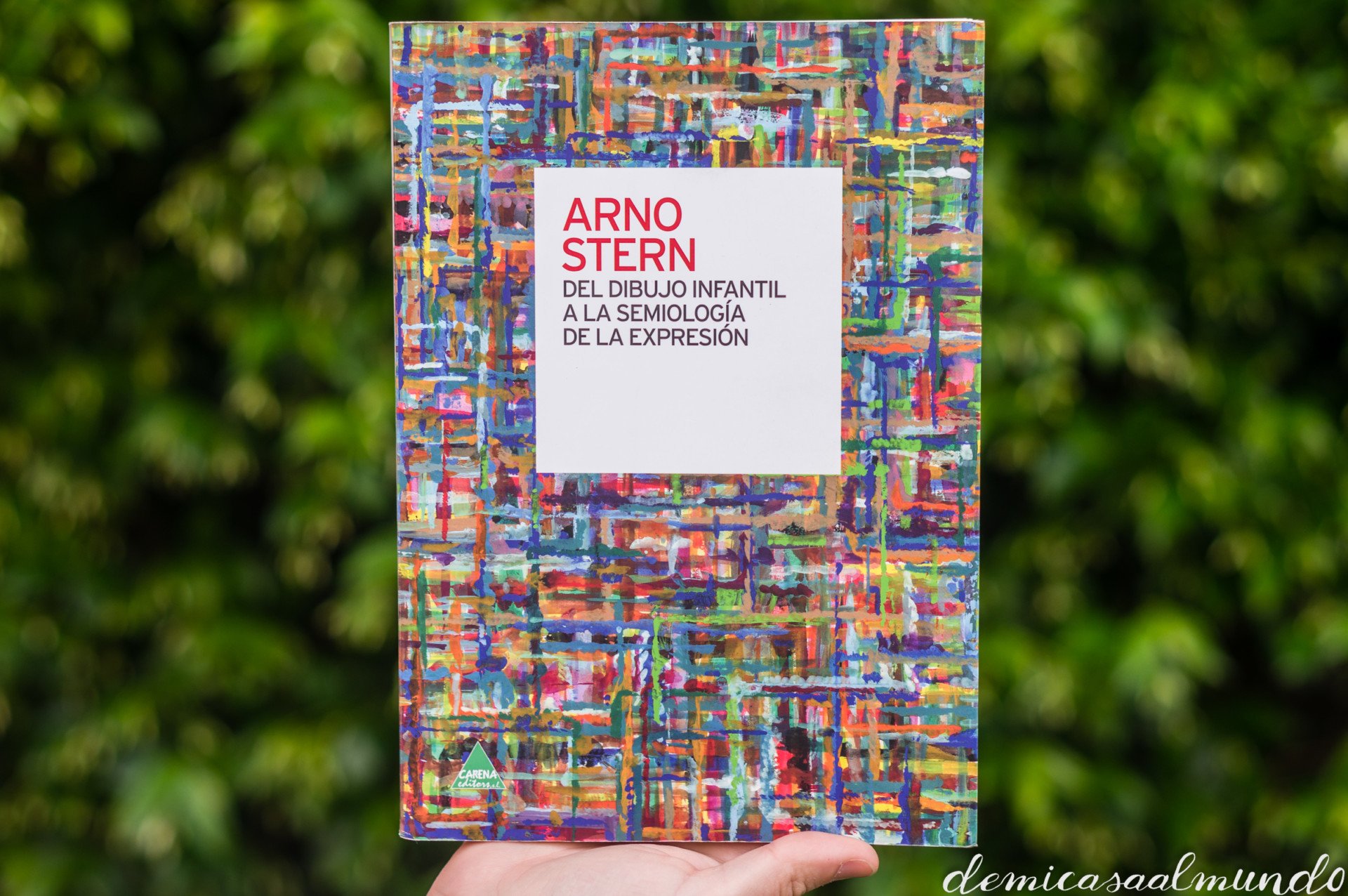 Since then I have not stopped investigating his work, listening to filmed lectures that he has done all over the world and I can say that a person who has spent 70 years dedicating himself to studying children’s drawing, who has seen thousands and thousands of children drawing (of all cultures and races), can allow himself to formulate a theory with a base that for me is valid and reliable, and which is also being studied and scientifically demonstrated.

I felt for him something similar to what happened to me with Laura Gutman, who has spent more than 40 years analyzing life stories of thousands of people, and based on her observation and her exhaustive field work has built her therapeutic methodology.

And it is when over and over again you observe the same, with different people in different places at different times, that you can formulate a theory, not like other very famous authors who have created very questionable theories such as Freud and his psychoanalysis, even though he hardly saw forty patients in his entire life.

So Arno Stern after studying and analyzing thousands of children’s drawings has come to a conclusion: a child draws moved by an inner necessity that is governed by a universal code that he has called the Formulation.

And the Formulation does not reproduce, does not a copy the reality, but follows a code that is the same for all human beings.

Thus, all children always begin drawing the same primary figures, which do not start in the squiggle but in swirls and dots.

But we educate children in the attitude of producing a beautiful piece of work worthy of attention, and this is annihilating the Formulation. It is like we excavate at an archaeological site without knowing the valuable treasures hidden there.

Understanding the theory of the Formulation

If you are interested in children’s drawings, I strongly advise you to read the book by Arno, which is also fluid and illustrated with many drawings and photographs, but to go ahead I’ll do a little summary of what the Formulation is.

Formulation feeds on our organic memory.

The organic memory is this ignored part of our past, where we keep memories of our early childhood, including experiences, sensations, feelings of our prenatal life (in the womb of our mother), that do not disappear, but permeate and are retained in this separate depository.

Well, the brush stroke of the child is a natural manifestation of this memory, it is a way of expressing it (nearly the only way), and develops without external input, it is an autonomous and universal system.

The strokes that the child makes on a sheet are in his past, beyond memory, following a genetic code that is the same for all human beings, and this is the way that s/he has to express them.

And so a little child starts drawing swirls and dots, which s/he repeats and repeats in a very pleasant game, afterwards comes a round figure, and one day a radial figure appears (which immediately we call “sun”) after the child has made so many round shapes.

And from there appears a spine, which is its complement, that is when he starts drawing a horizontal line and another vertical one which goes across it.

Little by little the other primary figures begin appearing: from swirl to a drop, from a drop to a triangle, which is a cousin of the square, … and so on.

The child plays a long time with the primary figures, tries with them all the resources, creates them, discovers them, at the same time discovering and exploring the world.

Every discovery procures new discoveries, and thus creates his or her world.

And when some primary figures appear, such as: the triangle, the object-images begin to appear because the triangle appears in the house, in the character, in the tree, in the boat …

But these decisions to include the triangle in an object, are not rational, they arise from that organic necessity, provided that we allow the Formulation to manifest itself, it is so.

After reading Arno Stern’s book, the first thing I did was to check the saved Sunflower’s drawings and I was shocked, all the primary figures that he describes in the book, the phenomena of the repetition, I could observe it all!

The radial figure, the vertical and horizontal lines, the round figures, the dots…

Oh the dots, her first creations were little dots!

When she was barely two years old and I offered her a brush for the first time, she only did little colour dots, and that was so amusing to me that I bought a big canvas and every day I used to give her a different colour, and this way she learned the names of the colours and created an incredible painting that I had hanging for a long time in my office and now I have it in my fairy workshop.

But then that moment passed and she started playing in a different way, making round figures and swirls… I think it’s fascinating.

How should adults approach child’s drawing?

Having discovered this, how should then an adult behave towards child’s drawing? Here are some recommendations from Stern that we all adults should know:

Respect:
Do not impose anything on the child, be in agreement to the child’s necessities.

Eliminate the judgements that we express towards drawings:
This is something that we normally do not do when they play in a symbolic way, why then do we do with drawings?

Or perhaps would you say to a child who is pretending to be a pilot in front of a ventilator something like…?:

“This is a ventilator, it is for moving the air and cooling it down. You are not a pilot! In order to pilot a plane it is necessary to know many things that you cannot yet understand.”

So then let’s not judge, nor interpret their drawings.

Don’t ask them to explain what they have drawn:

The typical questions: What have you drawn? What is this? What did you want to represent? Is this a tree? A flower?

Often we do it with a good intention to demonstrate our interest in what they are doing. Even though for Arno this is a hipocritical excuse and in reality we want to show to the child our superiority.

In any case, this roots within the child the idea that the purpose of drawing is to communicate something and s/he learns to draw in a way that the adult wants.

Change “draw me something pretty” to “let’s play drawing”:

Because otherwise the child instead of playing with the stroke and the colour, satisfies the expectations of the adult. The child internalizes that drawing is for others, and it can be done well or badly.

Let’s be witnesses of the Formulation, which is like a bean that germinates if it finds the optimum conditions. Leave out everything that damages the game of painting and drawing, encouraging the natural and free stroke.

The game of painting should be free, unrestricted, with no subject nor comments and in good conditions, that is with good colours and materials and in a quiet space, without movement, noise, and if we don’t have access to good materials, simple black ballpoint pens and white sheets can be the start.

The message of Arno Stern is clear: thwarting the Formulation of a child will make a mark on him or her for life. To be able to express it allows the development of its energies and the transformation into a balanced being.

An adult has the power to destroy the spontaneous play of a child. And abuses it, voluntarily or unconsciously, with the idea of doing it for their own good. And instead causes damage, most of the time, irreparable. Children should have the right to live the Formulation in the game of painting. – Arno Stern