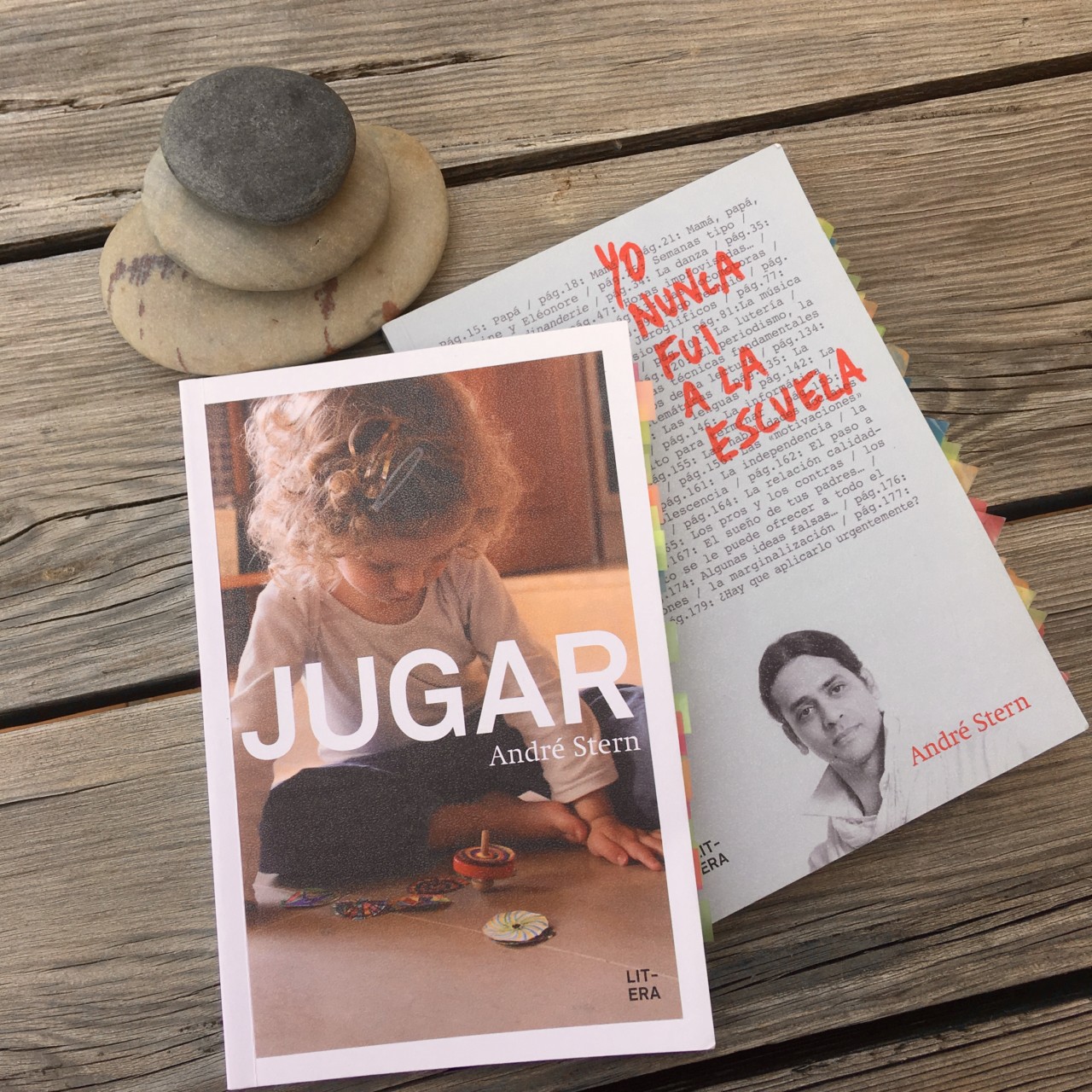 In one of my posts last year I already shared the deep admiration and enthusiasm that I feel for the work and life story of André Stern. Musician, composer, guitar maker, author and journalist André never went to school and tells his extraordinary experience in his book Yo nunca fui a la escuela (in spanish: I never went to school). And yet, as he says, his story is very ordinary because it would happen to every child if they had a chance to play with no interruptions.

This year I am yet again inspired by André as I just finished reading his book Jugar (in spanish: Play). It is a delightful read that joins together André’s recollections of his own childhood, observations about the play and discoveries of his boys Antonin and Benjamin, as well as original reflections by the book’s guests. Among the contributors are renowned professors, teachers, and various experts in creative and alternative education, including André´s father Arno Stern. The book explores various themes from gentle birth to the very earliest discoveries that babies make through play, touches on some of the latest scientific research about how the brain learns, and most importantly encourages us all to see children and play differently – with all the respect and seriousness that they deserve.

In addition to the Spanish version, the book is also available in French, German, Hungarian and Polish (the full list of all André’s publications can be found here). André has kindly allowed me to translate a few of my favourite quotes from the book into English. Here is a little glimpse of his profoundly important invitation to get serious about play.

∼ From the very beginning we await the progress of our children. We get so obsessed that they need to become something, that they forget to be. ∼

∼ Everyone should know how essential play is for a child. Play is a realization of all his or her desires. It reflects all the discoveries and encourages exploration. Don’t ever interrupt the impulse of a child who is playing! ∼

∼ The entire world is convinced that children go towards other children. It might be that a daily observation confirms this. But the reality is different: children go towards those who play. And in our world, the only ones who still play are kids. ∼

∼ I was never made to feel that such or such thing was inappropriate for my age, or that I wouldn’t understand something or that they could only explain it to me “later when I was older”. And I was never told or made to feel that I should no longer do this or that, that I was “too old for those sort of things”. I have never had to fill up my head with themes that were not relevant to me, nor have been worried about being unable to learn tomorrow what I hadn’t been able to learn today. (…) I have never had to sacrifice the present in the name of a possible future. I was always considered, treated and respected as a person in all ways, in a state that was completely relevant to my development. ∼

∼ We are the only species that wakes up their children. ∼

∼ Owing to a practice which is so widespread that nobody thinks of questioning it, the students are obsessed with the idea of improving their weaknesses. Subjects in which they are “bad at” are found and they are encouraged to make an effort to at least reach “the average”. I never asked myself in which subject I was bad at. I did exactly the opposite: it was in the areas in which my enthusiasm had made me “good at” where I tried to go even further. I had the possibility to develop my strong points and achieve excellence. This way I discovered that enthusiasm, when it is lived fully, creates a secondary effect: competence. Which brings with it another secondary effect: “success”. What tranquility. To discover that we can liberate ourselves from the pressure to pursue the necessity of success and change it for individual enthusiasm that we all have at the reach of our hand! ∼

∼ Children always show us how serious they are. It is up to us to recognize that seriousness with the respect it deserves and to respond with an equivalent frankness. ∼

∼ Until we change our way of seeing the play of our children, until we change the opinion in regards to it, it will continue being considered as an activity without importance or priority. I am not advocating in any way to return to childhood, only that we take seriously a child who is playing. ∼

∼ On the one hand there is manner in which we direct our words towards them, made up of orders and threats. The adult is simply exercising his or her power. This relationship of dominating-dominated is even more ofensive because kids, on their part, put all people of this world at the same level. Who would dare at this day and age speak like that to their partner? However, there exists another manner that is not less harmful even if more discreet: the ironic tone. As it is “standard tone” and is officially approved, hardly anyone notices it and even fewer are offended by it. ∼

∼ We wish to see in our adults, one day, certain qualities. But these qualities are precisely those that children live when they are in their element: play. ∼

∼ It means that – contrary to what is preached by opinions and metodology vastly extended in our regions – far from being stimulated the autonomy of a child appears to be hindered when he or she is left “to cry themselves to sleep” in a separate bed; or when everything that obligates him or her to “leave the nest” (or “the skirt of the mother”) is favoured. As surprising as it may be, the more attachment that the child is given, the more autonomous he or she will become. In a sincere way and on their own. ∼

∼ Play has a connotation of something light, negligible in the mouth of a serious adult. “First finish your homework, then you’ll go to play…”. “Do you not see that I don’t have time to play?: I have work!”.
Stopping opposing play and work could change the world. Who knows what would happen if we put the joyful fervour of a playing child at the service of our social organization? ∼

∼ A child is conscious of his or her unlimited potential, is completely connected to the conviction that they can learn all and be all. Later he or she notices that the entire world around them sees things in a different way: “Dear child, you are not enough. You are still not suitable, you are nearly a zero, you have to transform yourself, wait till you are older.” And this disparity, this opposition between their own opinion and that of others, tears them up. ∼