Home The legend of the Cosmic Snail

The legend of the Cosmic Snail 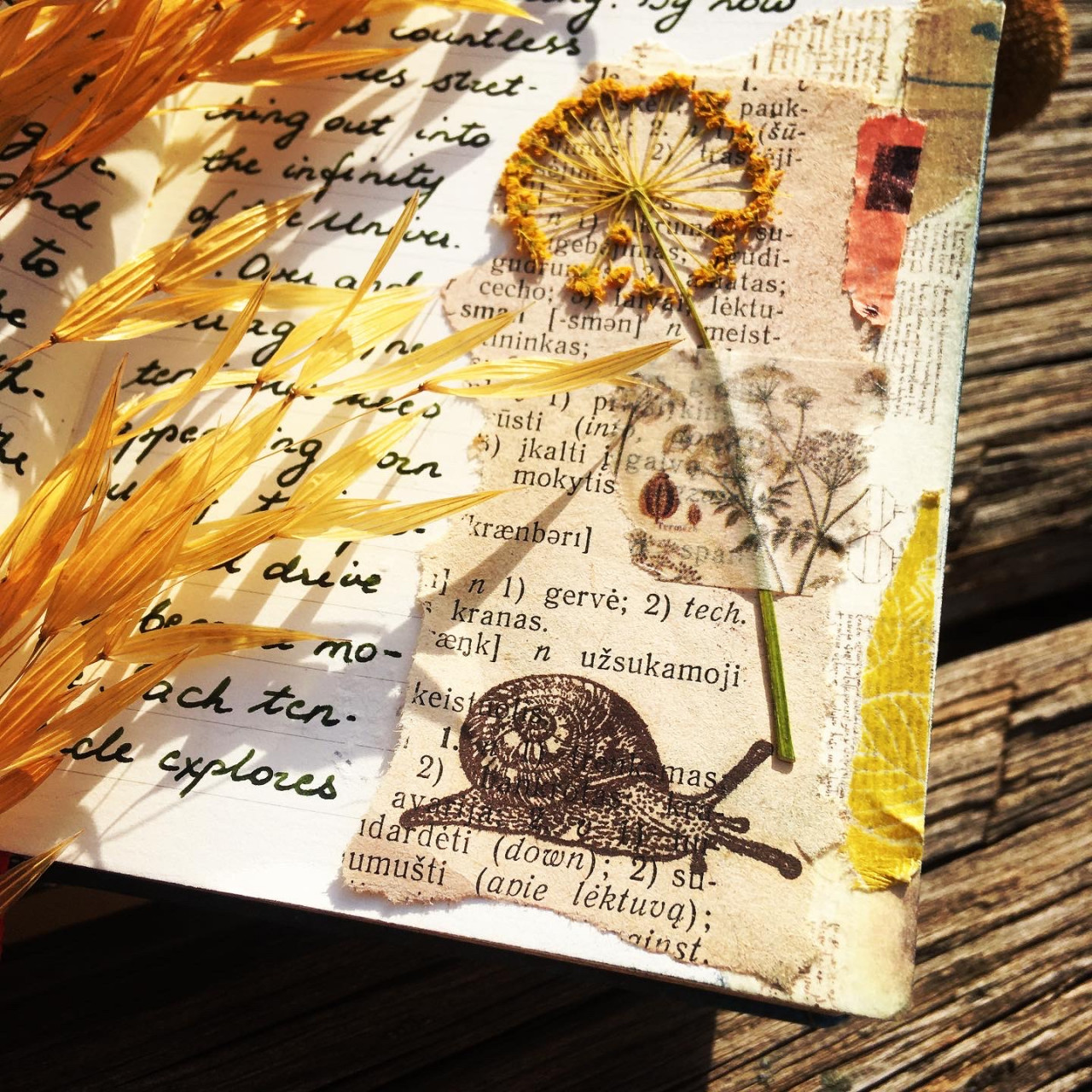 One of my favourite quotes from Elizabeth Gilbert’s book Big Magic is the following:

“I believe that our planet is inhabited not only by animals and plants and bacteria and viruses, but also by ideas. Ideas are disembodied energetic life-form. They are completely separate from us, but capable of interacting with us – albeit strangely. Ideas have no material body, but they do have consciousness, and they most certainly have will. Ideas are driven by a single impulse: to be made manifest. And the only way an idea can be made manifest in our world is through collaboration with a human partner. It is only through a human’s efforts that an idea can be escorted out of the ether and into the realm of the actual”.

This has never felt more true and accurate to me than when a few months ago an idea came and invited me to write a story. I agreed and we have become playful partners with it. Some days the story doesn’t let me sleep because it just overflows my mind with sentences and words, and then other times – days or weeks pass, and I feel the story rest or patiently wait for our next rendezvous. Allow me please to share with you a little snippet of it here.

The forest seemed quieter and emptier as many places tend to be early on Sunday mornings, yet there was an unmistakable feeling that it was awake and aware of her presence. The girl looked around but all she could see was tall dark flickering tree trunks. Many many of them.

It felt hypnotic – this combination of turning around, the flicker of the vertical tree silhouettes and the distant hum of the drums. And now she wasn’t sure anymore how long she had been spinning, or whether it was the forest that was dancing around her. But ALWAYS remember – like the girl just did – whenever you find yourself someplace dark, and it seems that the world is spiralling out of control, it means you’ve lost your focus. You simply have to place your mind on whatever it is that you want or are looking for. “Bear!” she heard the echo of her own voice.

The spinning stopped. “Yes?” the Bear looked up. He was standing right in front of her and was distractedly dipping a big leaf into a cup of hot water. There it was again, that feeling of chumminess, like the two of them went way back and were just in the middle of their usual chat over tea.

“Can you tell me your name?” asked the girl.

“Yes,” nodded the Bear. “If you are ready to create a new mind.”

“What do you mean?” the girl watched the Bear who was now absent-mindedly chewing part of the leaf.

“Every time you name something, you create a new mind because you define it as other-than-you. For example, if you thought this leaf is an extension of you, then you would simply know it as “I”. But the moment you name it “a leaf”, you stop perceiving it as one with you. It becomes a separate point of perspective, an “other”. Adding a name or a label, therefore, is a way of slicing All-That-Is, separating it into pieces. And while, of course, the separation is only an illusion, nonetheless, this newly “separated” slice carries within itself a share of the Mind of All-That-Is. Humans are experts at this naming, slicing and creation of new minds, as it begins from the moment you arrive to this planet and you yourself are given a name. And so you learn to define yourself as separate. You are magnificent creators, but in the process you forget that all minds – including yours – are not separate, they are simply illusionary slices of the one Mind of All-That-Is. Mori. You can call me Mori.”

The world around the girl continued to flicker, and the Bear disappeared behind a bunch of shrubs. She listened to the sound of the drums for a moment while the Bear’s words slowly sunk in. And speaking of slow things – out of the corner of her eye she suddenly noticed something flicker into being. The girl turned to see a giant snail that was making its way across the subterranean moss. Its smugness didn’t even surprise her, apparently, snails were the same everywhere. Smug slithering subterranean snail.

“Mori!” she looked around for the Bear, “I want to know about the mind of snails.”

The Bear appeared in front of her, and looked busy applying pink nail polish onto one of his paws. “Ah, yes,” he mumbled, “Cornuaspersumism.”

“Cornuaspersumism. It’s a set of tightly knitted stories that are on the minds of snails and other terrestrial and sub-terrestrial pulmonate molluscs. While snails’ bodies adhere to surfaces, their minds are excellent at adhering to their beliefs.”

The girl could see the snail stop for a moment as if aware that someone was talking about it behind its back. Except that snails don’t really have backs – behind its shell! Focus, focus!

“Do you mean like a snail religion?” asked the girl again, while the snail appeared to be dancing to the distant rhythm of the drums. Dancing snail, now that’s something you don’t see every day!

“Sure. If you want to adhere to that label, then yes,” replied Mori and gently blew some air onto his pink painted claws.

“What do they believe in?” the girl continued with her questions.

“The Legend of the Cosmic Snail,” said Mori the Bear and looked intently at the girl as if he was reading her mind for the next question, “and it goes like this.

The legend of the Cosmic Snail tells us that in the beginning there was nothing but the Big Silence. And then – or, perhaps, more accurately “when the now began” – from the very centre of that stillness, very VERY slowly out crawled the primeval Cosmic Snail. Nobody knows how long it took to crawl out as nobody was there to witness it, and there was no way of measuring time, therefore, time didn’t exist. It’s only known that when the Cosmic Snail finally did come out from the centre of the Big Silence, it began to ever so slowly extend its first tentacle – as all snails always do whenever they crawl out of anywhere. But because this was in the beginning, there were still no labels or titles for anything – so the Cosmic Snail did not know who it was or what tentacles are or what squidgy shapes they are usually attached to. It simply had an urge – the very first desire that ever existed – to expand from its shell, which it wasn’t even yet aware it had.

As the first tentacle kept extending, it began to slowly move and bend, probing and groping the vast infinity of the nothingness around it. Probably billions or maybe even trigintillions of snail-years later – no one was counting – the tentacle slowly bumped against  something hard. In the long history of things bumping against each other all across the vastness of the Universe, this was perhaps the slowest, gentlest and the quietest bump, and yet undoubtedly the most impactful one of all. The tentacle had reached the edge of the Cosmic Snail’s own shell.

As the first tentacle began to slowly pat along the edge of the shell, the Cosmic Snail felt it again – this sudden urge – the overwhelming yearning to expand its awareness, to know itself. And just as the surge of the desire rippled through its being, out popped the second tentacle. It stretched out into the infinite nothingness full of endless possibilities, eagerly searching and exploring.

The legend has it that these surges and the eternal expansion of the Cosmic Snail are still continuing. By now it has countless tentacles stretching out into the infinity of the Universe. Over and over again new tentacles keep appearing, born out of this powerful drive to become more. Each tentacle explores a different aspect as it moves and probes, perceives and senses from a unique angle. And so through an infinite number of perspectives the Cosmic Snail continues its neverending expansion of self-awareness and knowing itself.

Snails believe in the legend of the Cosmic Snail and think that they are here to embody it. They know they are an extension of it – a tentacle, you could say. Therefore, you will never see a snail pushing against anything – they remember that the Cosmic Snail never resists anything in its path, because it knows it can only ever meet one of its own parts.

Time moves very slowly for snails, which means they have a lot of it and can move without any rush. Well, it is sort of the other way around, actually. They know that the Cosmic Snail’s expansion will never be done, so they choose to move slowly. What’s the point of moving fast if there is no end that can be reached, they think. And then time has to obey and slow down for them too.

The purpose of life – as snails see it – is to explore and feel and taste and observe, to be that through which the Cosmic Snail can know itself. You see then, why snails always look so smug and entitled – they never question their worth.”

Just as Mori the Bear finished, the girl heard the drum tone pause and change again. Her time in the subterranean forest was up, and the rhythm was ushering her to leave. Mori was beginning to fade away into the thickets.

“Mori!” the girl called out. “Any last words of advice?”

“Yes,” the Bear turned, “be more like snails. Think – who do you represent and embody? Slow down time more often, and never ever question your worth.”

Tags: Big Magic inspiring books magic The Girl Who Wanted To Be A Shaman The Legend of the Cosmic Snail writing
Share this
0 likes
Related Articles
0 Comments